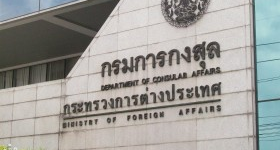 The nightlife trade in Pattaya was dealt a blow when new smoking rules came in. These rules even though on book since 2002 was never really enforced until the past year where the police has started clamping down. The Non-Smokers Health Protection Act came into being in 2002 however most businesses in Thailand simply ignored it as it was not enforced.

This changes over the past year as the government has started clamping down heavily on smoking in certain areas. Many entertainment places in Pattaya had to in many instances create a smokers and non-smokers areas in their restaurants. This came at a cost to many of the small time operators of small businesses.

The law also dictates where you may smoke while outside.  These are however limited to any area which is air conditioned such as train station, bus stations and any places where food and drinks are sold. Well that covers much of Pattaya and Bangkok then. You are also not allowed to smoke in non-airconditioned places such as bus stops, train stations or any place where there is public transport. So how close can you smoke to a bus stop? Well that depends on the policeman about the write the fine. The general rule appears to be in Bangkok at least – 10 meters. The fine – 2,000 Baht and if you dare put it out on the side walk that would cost you an extra 500 baht for littering. If you are a business in Pattaya or Bangkok then the fine is 20,000 Baht.

Now it really get confusing as the Health Ministry has allowed certain places to be excluded from the law – pubs and restaurants and also nightclubs. There is just one problem. Its not been legislated hence causing confusion amongst operators. So what now – many have asked while others have made costly changes while some still run around the law.

What about hotel operators in Pattaya? Well this is where it gets even more confusing as you are allowed to smoke in the lobby but not in the restaurant. Some have pointed out that the lobby is an air-conditioned public area. This has now created further division of the law as hotel areas are now classified into 3 zones. The lobby now becomes a Zone 3 which means you can smoke there and the restaurant becomes a Zone 1 with a total smoking ban.

Confused? In some point in time you are going to need to speak to one of our solicitors in Pattaya if you want to open a restaurant or pub and get guidance about how the law is being enforced and what changes you would need to make. Don’t get caught on the wrong side of the law.